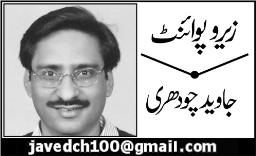 If you to try to cross the road or step on the road at a point other than Zebra crossing on red indicator in Poland you can be detained by the police, you could be fined (3400 rupees) and put off in lock up for 24-hours. Warsaw is among the few cities where pedestrians may also suffer penalties. That was probably the reason, did not see single person crossing the road at the wrong place or on red indicator during four days.

Poland is a beautiful country in Eastern Europe, it’s one border matches Belarus, Ukraine, Russia and Lithonia and the other with Czech Republic and Slovakia, and the third border touches with Germany. Baltic Sea is in the north of it. It is among the few countries in the world whose borders are connected by seven countries. As in Europe and other developed countries, women are more visible here, they seems working everywhere, woman is big sign of development in any country of the world.

If you see more women in society, you see them appearing on roads, streets, bazaars, markets, railway and bus stations and airports and you see them walking on footpaths at midnight, you get to know it is safe, decent , even humble society and law and order is too extreme. Against this background you can evaluate the circumstances and the future of your community with great ease. I am against unveiled women, orders of veil are present in Allah’s sent four religions. You see Jew, Christian and Muslim women if they are religious then they should cover the head and also hide their body.

I have seen many Jewish, Christian nuns and Muslim women in the world dressed in scarf, loose coat and gowns. ‘The veil is very good but it is the reality no religion of the world stops woman to come out and participate in a career as an individual. In our country, 52 percent are women, there are ten million people, and 52 percent of those ten million people and how can you practice development by separating them from practical life. So we also have to understand individual women and to give them opportunities to work but it will not be possible as long as we do not make our own streets, squares, footpaths, bus stops and shopping centers safe for women. In our country five-years-old girl to 85-year-old woman is not safe, so how can we call ourselves civilized and progressive, but the Polish woman is safe, day or night they can be seen in society.

They people are very high in civilization and decency, talk in a soft voice and do not fight with each other. Inflation is lower than in Western Europe, hotels, restaurants and transport is cheap. Tourist take special interest in Poland, there are numerous reasons for this interest. Being the cheapest one is one reason, other reasons include history of Poland, Jews past and Krakow Old Town of Warsaw, strengthening of law and order, crime and lack of openness of society. You go out in the evening, and see restaurants, cafes and groups of people. The River Vistula flows in Warsaw, The River divides the city into two parts.

You go to the river at night you will see young men sitting on either side four to five kilometers of the river, they sit here until late at night. City police control but you do not see cops anywhere. Krakow is a tourist town, 80% of tourists coming to Poland must come Krakow. It is also known as Poland’s cultural capital. You see ancient church in every street in it. I have seen wonderful church in Krakow. I was standing between street, there was Church for the poor on right hand and Church for the rich on right hand. The Guide told me in the era of kings, only the rich could enter the church of princes while poor people church was for common people.

I was amazed at the contradiction, at least in Islam there is same mosque for poor and rich. In our religion the President, Prime Minister and peon at least offer prayer in one mosque, group or sometimes in a row. Pope John Paul II was a resident of Krakow, studied in the same city and remained Pope of the Christian world from April 2, 1978 to Oct 16, 2005. I went to his house and to the window where he stood up and show his face to general visitors. Krakow is the place to see the Jewish community, The Israeli restaurants run music in different languages of the world. Jews have made here hotels, inns, hostels and restaurants for visitors.

Police keeps patrol in Jewish neighborhood all the time. Two police officers were also standing in front of Senna Goga. They kept gazing me until I left the door of Senna Goga. The government has given the public numerous facilities. They supply hot water is the whole city of Warsaw. Warsaw’s municipal corporation has put two large water heating plants in the city. These plants provide hot water to the city. People do not have boilers in homes. They open hot water faucet is and get hot water for themselves. They use clean water, even for washing clothes and bathing and keep their house warm.

They laid Copper pipes in the floor. Hot water circulates in the pipes and it makes the house warm. Like most countries of Europe, Poland faucet water is worth drinking. You open up the faucet and drink water without fear. I tested it in Paris and Norway and last month in Georgia too. But I cannot make this mistake in Pakistan. Islamabad is Pakistan’s most beautiful and richest city. But in this city, let alone drinking faucet water you cannot even wash your face with it. Water Motors are set in half the homes of the city. But these motors are not able to provide drinking water, I wish our government to provide clean water to people in city, at least for the citizens of Islamabad to give drinking water suitable to human health but this is not included in our priorities. We can only give tension and death to people, we cannot give them happiness and health.

Warsaw University is worth watching. ‘It comes in the way from the new city to old city. Its a common gate on which is written the Warsaw University. If you enter, it seems a long compound containing various blocks. 56 thousand students study at the University But inside the campus does not seem any hootenanny. There are Department of different disciplines in right and left of University. Department’s buildings are located on the road but on the street do not see any traffic block or chaos. Traffic and people keep moving and if you are not informed you will not know you would walk up to the University Area. In view compared our educational institutions seem all-time in chaos, shaking the center of the flock, and live events. The people of the world build their houses where educational institutions, churches and cemeteries are building around because there is peace.

In our country, the plots are not sold located behind the left and right of the schools, colleges, universities, mosques and cemeteries. People are afraid to live there. If you ever pass through Lahore, Punjab University and Karachi University, it will be difficult for you to drive. If we cannot teach manners to university students to use zebra crossing, overhead bridge and underpass. Then how long in left in funeral of civilization and decency. Warsaw University Library is a masterpiece aesthetic tastes. The building is alive around the clock. Any time you go there, you’ll see people out there who read and Research. Library Exterior wall is a masterpiece. All major languages of the world are written on the wall ‘Arabic and Hindi is also included.

Two articles written on the wall of two languages most surprised me. First scientific language and the language of music. These two articles are written at the end of the wall and it proves that the world’s second last, language is the language of science. While the language of the music world’s ultimate. I agree Science and music language are really Deadline. You do not require a letter to understand and learn these languages. You just drag on the ground a few crooked lines and lines that criss cross they will become word and sound. Two women have a PhD on Asadullah Ghalib and Sultan Rahi in Warsaw. Sultan Rahi acted in most films in the world. It is included in Guinness World Record. He worked in 813 films in his 58-year life and shocked the world. He was killed on January 9, 1996 at the Grand Trunk Road near Lahore.

We could not arrest his killer. A Polish woman has a PhD on our artists whose phrase ‘ Molay nu mola na maray tay mola nai mar sakda’ is alive even after his death. Sultan Rahi died but their roles are still alive today and even if they die. The PHD on his personality will keep him alive forever. If not in Pakistan, they surely will stay alive in Poland. While other woman by doing PHD on Ghalib have taken poetry like “ Naqsh faryadi hai kis ki shokhi tehreer ka” to Poland. These two great PhD of achievements of are both Urdu and Punjabi.

I saw a strange house in the Old Town of Warsaw. That was an old building. There was no house on the right and left of the building. Both sides were empty plots. The guide said the building was ‘brothel’ library ‘ a hundred years ago. People have refused to settle in the neighborhood. So there left vacant plots from left to right, they are still empty. I laughed by seeing these plots. I thought perhaps our society will be clean and pure if we also refuse to settle with the bad guys.